Gary L Child, D.O., received his Bachelor of Science degree in Zoology from Brigham Young University in 1974, his Master of Science degree in Marine Biology from Brigham Young University (with research done at Friday Harbor Marine Laboratory) in 1977. He worked for the Upjohn Company as a Hospital Representative in the Salt Lake teaching hospitals affiliated with the University of Utah Medical School. He then received his Doctor of Osteopathic Medicine and Surgery degree from the College of Osteopathic Medicine of the Pacific, Pomona, California in 1987. After his internship at Pacific Hospital of Long Beach (which included training at University of Southern California Women's Hospital), he moved to Anchorage, Alaska where he started practice in Family medicine. After seventeen years in Family Practice, Leon "Joe" Chandler M.D recruited him into the Alaska Spine Center/A.A. Pain Clinic in Anchorage. Dr. Chandler, Cynthia Kahn M.D., and Susan Bertrand, M.D trained him along with the fellows in pain at the Alaska Spine Center.

After seven years at A.A. Pain Clinic, he moved back to Utah, the state of his birth, to be closer to family. He practiced chronic pain management in the Murray Utah area for a little over five years before founding Alpine Pain and Rehab Solutions of Utah. He has had extensive experience with injections and medical management of chronic pain. He is a member of the American Academy of Pain Medicine and the Academy of Integrated Pain Medicine (two of the oldest national pain organizations in the United States). He is anxious to have people learn how to understand their chronic pain and deal with it in the safest ways possible. He believes that chronic pain patients can become more functional and lead productive lives with a better understanding of their disease, which requires a biosocial psychological approach to their pain.

He relaxes by enjoying his wonderful family and watching his grandchildren and their exciting achievements. Since everybody thinks doctors play golf, he wants you to understand that his role is to provide golf balls in the rough for others to find... kind of like an Easter egg hunt. Fishing has been hard to get back into now that he is in Utah. He feels a little self-conscious about taking a salmon rod down to the lake to fish for trout. 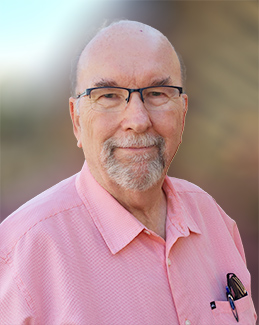